Yozora Yoko is one of candidates for AKB0048's 155th Generation.

Yoko has blue hair which is cut somewhere between shoulder and waist length and orange eyes (she has a heart-shaped shine in both of them). She has a very eccentric sense of style - she likes to wear colourful clothes with lots of frills especially skirts and dresses often in colour combinations that make no sense together.

Yoko is very cheerful, energetic and slightly childish girl who gets excited about everything. She is very curious and talkative but not very bright which results in her asking some very strange and dumb questions and completely misunderstand what others arw saying. People often find her personality slightly annoying but she doesn't seem to realise that. Even though she is usually full of energy she isn't confident in her abilities and easily gets scared and worried about every little thing but overcomes this when she has to help friends. Yoko is very naive and innocent and often doesn't even realise if someone insulted her or if someone wants to trick/prank her. She is very friendly and just wants to be friends with everyone and would like to talk all of the time. She always admires those stronger than her and tries to get close to them in hopes that they'll protect her if she ends up in trouble.

Due to living a happy life without much trouble Yoko doesn't know how to handle sad and scary situations. When it comes to them she usually freezes and is very sad unable to understand that the world is not a happy and peacful place that she believed it to be. She refuses to believe that and would like to stay innocent as a little kid forever.

Yoko had a happy childhood with her parents as an only child. She grew up on Sternstar planet that is famous for having unusual sense of fashion and one of planets that are biggest AKB0048 supporters so Yoko grew up with music all around her. She knew since young age that she would love to be an idol as well. Yoko was a person who enjoyed everything and wanted to be friends. Some found her annoying (something Yoko never noticed) while others liked how open and friendly she is and enjoyed her company despite her sometimes childish behaviour.

Yoko was big fan of whole group but was especially inspired by Makori Ririka - whom she considers the brightest flower that should be number 1 in the group despite never ranking very high in elections. Yoko is a huge fan for her confident Makiri personality and strongly admires her.

Yoko turned 12 shortly before auditions for 155th generations and was very excited that she could finally try to be part of the group. She passed the first round and despite her parents beeing slightly worried they let her leave home to attend second round of auditions.

At auditions Yoko met many other girls and commented that all of them seem very interesting and nice and she seemed to be especially fond of Ella. She called various of the girls by nicknames which annoyed many of them especially Mikoto and Kaguya however Yoko didn't seem to get it. She was very excited when members arrived and when she saw Ririka she immediately ran up to her to tell her how much she admires her. Yoko annoyed many of the girls with her behaviour but she didn't realise it and just had fun.

Yoko gave a very long introduction of herself in which she spoke of various things jumpining from one subject to another and also spoke about how much she loves Ririka.

Makori Ririka - Sempai. Yoko is a very huge fan of her and admires everything about her. She takes every possible opportunity to tell her how much she loves her and tries to spend as much time in her company as possible. Yoko especially admires Ririka's confidence and micsaber skills and believes that Makori Ririka should have been number 1 00 idol since joining the group. She calls her Makiri-sama and she is one of the rare people Yoko listens too.

Kumotani Julie - Fellow Kenkyuusei. Despite Yoko always getting confused at ordinary stuff she never seems to get confused by Julie's randon comments.

Chiba Miku - Fellow Kenkyuusei. Yoko is impressed by persona that she created to play along with Kagome's magus ideas and believes it to be true.

Mizu Kaguya - Fellow Kenkyuusei. Yoko likes her and originally called her Kagu-chan depite her being against it. After she gave her a plush toy Yoko showed more respect by calling her Kagu-san but after Kagome's comment comparing her to Santa Yoko started calling her Kagu-Claus.

Chizu Snow - Fellow Kenkyuusei. Yoko gets along well with her as they are both very energetic.

Sengawa Kagome - Fellow Kenkyuusei. Yoko has big respect for her as she believes that her claims about magic and being magus are true. She calls her Nelle-Nelle-sensei and considers herself to be her magus apprentience.

Tachibana Elisabeth - Fellow Kenkyuusei. Yoko is very fond of her and finds her very interesting. She calls her Ellie-chan.

Arisugawa Mikoto - Fellow Kenkyuusei. Yoko likes her and calls her Miko-chan even though Mikoto is not very happy about that.

"Boredom is the most boring thing in the universe!" - to Chizu at 155th Generation Auditions.

"I'm not a battery, I never run out of energy." - to Asuna at 155th Generation Auditions.

"Yay! I said something smart for a change!" - during MC at Yuuna's succession concert. 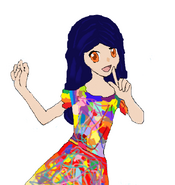 Yoko in her casual clothes.