"I am my cellphone!"

Takaine Miyako ( ) is the co-captain of Team A, as well as the current holder of the successor name Minegishi Minami the 7th (７ みなみ). Given her stature, she's commonly referred to as Miichan (みぃちゃん). Prior to succession, however, she simply went by Miko (みこ).

Miichan is seemingly blessed with nifty genes, having relatively tanned skin and a graciously thin figure to show for it. Heart-shaped rings gleam in her dual-colored eyes toned between purple and green hues, unintentionally abetting theorists to surmise her condition as a case of heterochromia iridium. However, nothing has ever gotten confirmed. As far as not wearing her hair down, the brunette with a hefty heart-shaped branding to the left of her bangs doesn't have an eminent hairstyle, therefore taking the liberty of styling it how she sees fit—most likely in accordance with her chic outfits.

Based on numerous (and several illegitimate) personality tests on the internet, Miichan describes herself as your typical ESFP. Growing up in one of Atamistar's lower-middle-class families who thrived on harbored relations within their neighborhood, she gravitated towards lively interactions and making the most out of what is currently there at her fingertips. However, the optimist in her was secretly wary of what she could thoroughly possess in the future. Radiating a warm and friendly image makes her easily approachable; the idol's tendency to hold long conversations — even if they ultimately become about herself — further stipulates solace regarding her character. If you need someone to cure melancholic atmospheres, Minegishi's the person to call.

Upon moving to an affluent part of her home planet after her father's promotion, just a few months before her departure to 00, Mii took time to evaluate her wants in life and whether she'd attempt to see them through. The teenager's morals always rested on the heart rather than the mind, and seeing as the new environment changed her family, she was bound to the same result. Having taken the initiative by arriving on Akibastar in spontaneity, the successor has continued to ride new waves of excitement since.

Leadership had never crossed her mind until her succession concert, even when she was the oldest child out of five in a household. In said instance, bearing strong interpersonal skills led her younger siblings to respect her, and the members followed suit once she assumed the position of Co-Captain. Although she swimmingly adapts to different circumstances, after mulling her desires a second time, she now understands it depends on the depth of her interest.

Owning up to Minami's 24/7 social media presence would be far from an exaggeration, as she unironically might be a step above any universal influencer. If not for her creative way of thinking or ability to multitask, the idol would appear a lot less on-screen in one day. As it is the opposite, Miichan feeds her audience with the right words, straying from conveying fictitious opinions—whether for the validity of a brand or herself. She's unashamed to admit her motivation gets driven by kind remarks, and as of right now — with no scandal foreseen — she doesn't see an end to them.

In the field of an Idol, Miichan is well-versed in singing and dancing, nearly stable when performing both. Her fighting tactics may fall short as she usually sticks to a micsaber, hardly ever resorting to other forms of combat.

Miyako grew up on Atamistar and saw both sides of the coin: one defiled from DES's previous control, the other fresh and what the planet is vastly known for. While her father never disclosed what he did to pay for food to put on the table, his eldest deduced he worked an office job—one that didn't pay or treat its workers well. However, her suspicions were quickly swept under a rug once they moved into a well-heeled neighborhood, which wasn't as cordial as their previous. Miko didn't see herself staying long anyways once 00 piqued her interest.

By passing both rounds in the audition, Miyako was on her way to becoming an official member of AKB0048, omitting the small hiccup that was getting detained by actual DES forces. Already going so far as to befriend a senior yet fellow Atamian, Miyako worked towards perfecting her part in the production of Genzai wa Fantasy janai, the 154th generation debut song. During the following months, she and the rest of her generation were announced as the forefront of their first A-side single appearance, Masshiro na Mirai wo Irodzukeru. The single happened to feature Miko's first center song, Kataomoi LINE.

Losing to Kasumi Yuuna in the Jyanken Taikai, she placed 4th overall and acted as a front girl for Kaetai Mirai. On the same day, a Team Shuffle sorted her into Team A.

Amid filming the drama Koi no Kensaku, Miyako fell ill, leaving fans worried about her sudden disappearance on SNS. Only a few days later did her condition come to light, revealing her upcoming succession concert, and on the day of, she inherited the name Minegishi Minami the 7th. Members of Team A also settled on her replacing soon-to-be graduate Maeda Atsuko the 19th as vice-captain.

After getting selected for the spring single, Minami wasn't expecting the counterfeit death of Kashita Miyagi, followed by Miyabi Honoka's succession and the former's revival. Her personal take initially derived from hurt feelings, yet she supposed she could eventually forgive them, especially when the fans appeared happy. Regardless, she contributed to Sekiranun no Geijutsu just as much as the new Watanabe Mayu and Matsui Jurina.

In June, Miichan enrolled in her first election, completely caught off guard by ranking 16th in the prelims with millions of votes. She ventured further in the Senbatsu, breaking into the Kami 7 and finishing strong at 6th. She kept her speech short and simple compared to others, but fans merrily anticipated her appearance in Kagami no Paladin nonetheless. Months later, Ikuta Erika the 11th announced her graduation. Although Iku and Mii weren't particularly close, the latter performed on the back row of Boku wa Natsukashii Piano.

Together with Takahashi Minami the 7th as TakaMiko, the duo managed to reach the second round of the Unit Takai, sticking to their Aikatsu motif by opening with Egao no Suncatcher, secondly Friend, and finally Kirameki Messenger. Unfortunately, they didn't make it to the final act, but they did seize a coupling song on the winning group's single: Ren'ai no Juice Flavor.

Takaine is written as . is translated to tall or high, meaning place, and , which is read as Ne, means sound.

Miyako is written as , with meaning beauty (beautiful), meaning night or evening, and that basically means child.

During her trainee days, she was curtly recognized as Miko (みこ). Once she succeeded Minegishi Minami, she inherited the nickname Miichan (みぃちゃん). 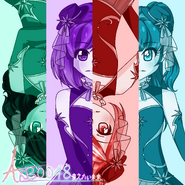