She has blue eyes and green hair, you use row and dressed very informal and formal clothes.

When she was young went to AKB0048, as their land was forbade the Idols she felt disappointed, the only one that supported it was hers friend and mother. Then when she was 14, she auditioned, and passed both rounds ...

Before becoming a member

When Akano passed the first round, she did not know anyone and thought negatively (like Makoto). But when she started to get friends, she started to think positively and trust herself. As a result she could pass the audition.

Aoi: Aoi and Akano are best friends in an attack on the Flying Get a DES attack. Akano asked Aoi if you want to and said if.

Ai: They are close friends 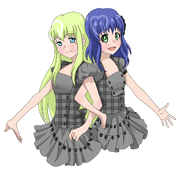 Akano worried about her family

Here Akano was sad because his dog had died ;-;