Hoshiko has auburn short hair which she usually wears down. Before succeding, her hair was quite long and curly. However, since her succession, it's short. She has coffee-brown eyes. In her hair and eyes are heart-shaped shadows, like of all AKB0048 members.

She likes to wear periwinkle clothes and things with star motives. She also likes silver and red clothes. Her casual clothes usually include a pair of jeans as she dislikes to wear skirts in private. After her graduation, those changed to diamond shape.

Hoshiko is a calm, caring girl who knows her goals. She often gets annoyed through things which are hidden from her, actually something to display that she is afraid of the truth. Hoshiko also cares very much about her fans and is afraid of disappointing them in any wise. Esspacilly the Senbatsu Sousenkyo is something, she's very afraid of. She has got a soft spot for sad moments and easily cries. She can be quite jealous as well, for example when the 151st generation joined 00, and she wasn't selected.

She is a hard-working person and very determinant. She believes that giving one's best will lead them to their goal.

Although she likes to perform and center performances, she dislikes the media pressure and talking when centering singles or having a front spot which she realized while Reality's promotion time. As well, she isn't a huge fan of competition. She prefers to support members instead.

Following the elections in SC0125, Acchan decided that instead of letting the pressure of the election and aiming for the top controll her, she wants to support the group as a whole. She doesn't aim for a high ranking in a song, a center or the center position in the election anymore but wants to help other members to show other sides of AKB, inspired by Akarin's speech.

Acchan is a good singer and average in dancing. While she is afraid of front spots, she is able to ignore the fear once she starts to perform.

She has also learned a few things about being a leader after she became Team A's co-captain.

Hoshina grew up on Akibastar, surrounded by AKB0048. Her mother was a huge fan of the group and as well a friend of a member. She always wanted to join, but never was accepted. Later on, also Hoshina learned about the wish of her mother. When the auditions for the 150th Generation opened, she auditioned - despite not beeing a WOTA until then, but wasn't accepted. Still wanting to join AKB0048, she became a staff member as part-time worker shortly after the 150th generation debuted. She auditioned in the next year too but wasn't accepted.

Shortly after the succession concert of Sayaka, Hoshina meet the members of AKB0048 and with this, the ill Sayuri who soon was going to succed, something no one of them knew. She transported Sayuri to the dorms and helped her until Hikari was able to do so

Following the illness of Amina, Hoshina became her Stand-In on a concert on Atamistar and with this, a trainee in training and the 151.5th Generation. While the audditions of the next trainee generation, Hoshina also participled in the training of the girls. She later also helped on the 'rescuring mission' and became a fullfledged trainee after the battle.

While the concert in the NTD, Hoshina was shuffled into Team A as their Co-Captain. Before this, she was announced to become a soloist - something no one had told her before - a suprise for Hoshina.

One day, she along other members, had her own worries. In Hoshina's case, it was a conversation, she had listened to which made her worry. Beeing in her thoughts and listening to music on the school yard, she suddently met the happy Honoka who steam-rolled her - of course not wanting it though. She kept beeing unconsious, despite beeing awake for a moment after returning to the 0048-dorms. While beeing unconsious, she met the original Maeda Atsuko in a dream, before waking up in the caven under the 0048 theater.

Her succession concert was named "True star: Shino Hoshina's succession concert' and held a few days after she woke up in the caven. The setlist of the concert ended with her announcement of becoming the 19th Maeda Atsuko, Iiwake Maybe and Flying Get.

Atsuko managed it to win against Yukari and Hotaru in the first Rock-Paper-Sissors Tournament in the new era. She lost against Nami. Later on, the voting single of SC0124 was announced, and Hoshiko was chosen as one of the four centers. In the prelims of the following election, Hoshiko ranked 12th with 415 154 votes. In the final rakings, her votes increased to 1 000 563. She was chosen to center the main track of AKB0048's 125th album Setsuzoku no Chain wa sudeni Koko ni Aru for which the members also learned how to play instruments. Just like the original Maeda Atsuko, she played the lead guitar.

Hoshiko lost to Sasshi in the second Rock-Paper-Sissors Tournament and placed 15th.

Her surname 真野 can be translated as true field and her given name 星菜 as star name. Hoshina was inspired by Hoshina Furea's surname while Shino was decided more or less random.

She is caleld Acchan (あっちゃん) by fans and friends. Before she became a successor, she was called Hoshiko (ほしこ/星子). 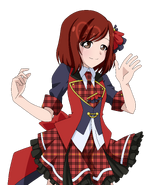