Komari Shibuya is a 17-18 year old girl from the planet Akibastar. She is a former member from the 150th Generation. Komari was a former successor of Mariko Shinoda .Her nicknames were Mariko (まりこ), Maririn (まりりん) and Marikosama (真理子サマ).

Komari has short light brown hair and blue eyes. She has short hair with full bangs and small eyes with long eyelashes. Komari has heart-shaped linings in her hair and eyes, like all members of AKB.

Komari usually wears mature clothing. She wears pants, blouses and dresses most of the time. She also wears the same Understudy Uniform as Hoshimiya Aoi, but when she becomes a successor, she wears the successor uniform.

Before AKB, she almost lost hope in them, but regained that hope when they announced the 150th generation auditions.

Komari has lived in Akibastar her whold life and has travelled to other planets as well. She has also been around AKB0048 and has been going to there performances. Komari was inspired by 00 and dreams of joining them one day.

Komari has been wanting to audition for AKB for a long time and almost lost hope in AKB, until they announced that auditions are open, so she still has hope in them and decides to audition.

One day, Komari comes down with a terrible fever and was not able to perform for a couple of days. Later on she found out that she had the Fever of Successon.

Some time later after her fever, Komari had her Succession concert and was revealed to become the first successor in the 150th generation and the Successor of Mariko Shinoda and become Mariko Shinoda the 12th.

After becoming a successor, Komari and Aoi were worried that they might become distant and not be friends anymore, so they promised each other that no matter what happens, they will always be friends.

Komari and Aoi became close friends during the auditions for AKB0048. The two of them are often with each other. Once Komari became a successor, Aoi thought that they might not be close to each other anymore, so they made a promise to each other that no matter what they will still be friends.

Miru and Komari are friends and Miru, Komari and Aoi are usually seen together. Miru looks up to Komari and askes her for advice at times. Komari admires Miru for her optimistic out look in life. 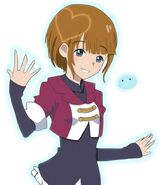 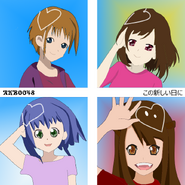 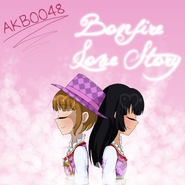