Samuikaze Ran is one of understudies of 150th generation. Due to being cold and not close to any of her fellow members she's been nicknamed Samui.

Ran has very long brown hair that is tied in high ponytail. Her eyes are dark blue. She is always wearing bracelet she got from her brother before she went to AKB0048 auditions.

Ran is a bit cold and prefers doing things alone. She doesn't trust people with exception of her older brother. She loves singing and dancing and is serious about her practice and becoming part of AKB0048 and often thinks that some of the others aren't working hard enough. She often says rude things to others, even if she doesn't want to and didn't mean it that way. Despite her cold personallity, Ran is deep inside herself actually very kind and sometimes a bit lonely but she keeps distance from other girls as she is afraid of trusting them and also because she believes it might distract her from her goal. As of SC0126 Ran never showed her kinder side to any of the members although she seems to be starting to very slowly warm up.

The main reason Ran is always so distant is a defence mechanism - she finds the emotions of others overwhelming and believes it is easier not to open up to the others.

Ran doesn't talk about her hobbies much so they aren't very known to the public. However as many would be surprised Ran's favorite things to do in free time are readng romance books or watching romance movies/anime. She likes other stories as well but for some reason she has soft spot for romance.

Ran seems to fairly good at singing and dancing and always worked very hard on practicing both of those things.

She is good at academics and gets good grades.

Ran is also good at organizing schedules for herself and always does everything on time.

Ran was born on Kanashistar one of planets with the strictest entertainment ban. She was born to very rich family. Her mother died when she was 6 years old and her father never showed he cared for her so only person she could always trust was her older brother Ryuu. He was the one who always helped her and took care of her.

One day when Ran was 9 years old, AKB0048 held secret live on Kanashistar. As Ryuu already heard AKB once before she thought Ran might like them and since their father is against AKB0048 they sneaked out of house to listen to them. Concert was attacked by DES. When Ran saw this girls singing, dancing and fighting she thought of them as most beautiful and brave thing she ever seen and decided she'll once join them. As she was growing up she was always practicing and had many arguments with her father about AKB. When auditions for 150th generation were open Ran decided to take them even though her father was against it. When he noticed that he tried to stop her but Ryuu helped her escape so she could go there. At that time he gave her bracelet for luck.

Ran wasn't surprised when she heard that audition will be battle and thought that all girls who werebdidn't really understand what AKB0048 was. She passed audition and became part of the 150th generation.

Even after becoming a member, Ran always stayed away from her fello members and didn't become close to any of them. She kept her distance and never called any of her fellow members by first name.

Ran was eating lunch at same table as Itano Tomoko and Shino Hoshina but she didn't talk to them. Tomoko and Hoshina both left and until the end of lunch Ran was sitting alone which she liked.

Ran went against Chiyo in the battle and lost. During the episode she got embarrased and shocked at one of the question being true which made it the first time she ever broke her serious and cold facade not only in front of the other members but also cameras. Ito Hotaru was quick to point that out.

After a prank that made all members believe that Kashita Miyagi died Ran suddenly started to feel guilty about not trying to be closer to any of fellow members. She never talked to Miyagi much and regreted that she'll never have a chance to get to know her better and she felt really guilty about not visiting her when she was in hospital. She started to realise that she should try to be kinder to others but old habbits die hard and she was unsure on how to suddenly start acting differently. Ran was completely shocked when it was revealed that Miyagi's death was just a prank, espeicially since she realised that her relooking at her life happened because of a prank - not a really emotinal event as she thought earlier. Despite that she still decided to be slightly nicer to the other girls however the change didn't happen quickly and it wasn't immediately very noticeable.

Following their talk at the Cupcake After Party Ran started to open up slightly to Rei although it took her months to completely admit it even to herself.

She ranked 13th in Sousenkyou.

She participated in Unit Taikai as part of RisingQ.

Samuikaze Ryuu - Ran's older brother and the person she is closest too. From young age Ryuu was always the person Ran trusted the most and the one who took care of her. He is the one who introduced Ran to AKB0048. He helped her run away from home to get to 150th generation auditions and got into big trouble with their father because of that. Before Ran left he gave her a braclet for good luck which Ran wears all the time. Ran and Ryuu exchange a lot of e-mails however lately they can't do it as often due to their father checking on Ryuu a lot due to his suspicion of Ryuu's contact with his sister.

Samuikaze Hiromi - Ran's father who is strongly against entertainment and helps DES. He was against Ran taking auditions and tried to stop her. He was furious with Ryuu for helping her. He was never a good father to Ran and Ryuu not taking care of them and being abusive to them. He is trying to catch Ryuu when he is writing to Ran as he doesn't want them to have any contact.

Inoue Megumi - Fellow Kenkyuusei and one of her roommates.

Hoshikawa Rei - Fellow Kenkyuusei and the first person Ran started to warm up to. She would at first deny that she enjoys her company but eventually strted to be more honest about being her friend. She also started to realise that they are similar in many ways. Rei is the first member that Ran called by her given name. They participated in Unit Taikai as part of the same unit.

Ito Hotaru - Fellow Kenkyuusei. Ran is often annoyed by Hotaru and her attempts to befriend her but some small part of her actually likes it even though she would never admit it. Their relationship consists of many arguments and are sometimes even said to be like a bickering couple. They participated in Unit Taikai as part of the same unit.

Harune Diamond - Fellow Kenkyuusei and one of her roommates.

Makori Ririka - Kouhai. Ran is not very fond of her.

Takahashi Minami the 7th - Fellow understudy before she became a successor. She rarely shows it but she actually has some respect for her and considers her as someone worthy of the name of Takahashi Minami. 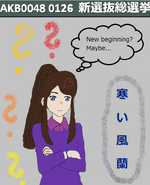 Ran and other RisingQ members.

"Great now I just spilled out some boring details about my life without particular reason." - Ran to Rei after telling her about the situation with her brother.