Miyoko Ryuuzaki ( ) is one of the current understudies of AKB0048's 153rd Generation. Even though she is known for having bad luck, she constantly tries to think positively. She is also known as Miyoko (みよこ) or Miyo (みよ).

Miyoko has short, straight, blond hair and big, vibrant, emerald eyes. Her roots are slighlty darker, in a colour akin to orange. Much like all members of 00, she has heart lining in her eyes and hair. There is also a crescent moon shape in her eyes, the meaning of which is unknown.

She has a good taste in clothes, despite not really keeping an active eye on trends. She is never seen without her trademark headband - no matter in which colour it is. She may be wearing something equivalent of it, such as headphones though.

As of recently, she has started to stray more towards black and green in her wardrobe, whenever it is not too hot for it.

Miyoko considers herself very much a normal girl, who by luck, ironically, managed to get into 00. She is seemingly followed by bad luck; always being the one to draw the short end of the stick, managing to be in the wrong place at the wrong time. Despite this, she tries to stay positive, as she feels a negative outlook on life won't make anything better. A lot of the misfortune that befalls her is actually her own curiosity's fault. She can also get awkward at times.

Miyoko's personality has developed a lot because of AKB. It was because of the group that she was forced to take the first big step in her life, she has grown more confident in herself because she got more friends than she originally had, and she has become a big Otaku, because of the influnence of Sasshi.

Miyoko is overall very average in terms of idol skills. She doesn't have an outstanding voice, isn't the best dancer, and handles MC's a bit clumsily at times. Her real strength is her relentless tries to better these traits, and has in her time in AKB gotten relatively far, often spending her days off to this task unless she is otherwise occupied.

Much like her other traits, Miyoko's self defence used to be average as well, not excelling in anything but not being the worst at anything either, but due to special one-on-one training with Miyagi, she has gotten immensely better in all areas of combat over a short period of time - even if she does, at times, regret it when she can't move in the mornings due to how sore she is.

Due to her shared interest with Sasshi, Miyoko has gained a lot of information on various anime, over various different genres. She knows a lot of random trivia, but it is a well known fact that if faced off against Sasshi in a trivia quiz, Miyoko would lose by a long shot.

Miyoko is from Aleenstar, and, much like most others from the planet, she held a dislike for AKB0048, but only because that was what she had been raised to think. She barely knew anything about AKB, and as such, it was rarely in her thoughts. She is an only child, and was mostly raised by her mother, seeing as her father worked a lot, and was very rarely home when Miyoko was awake. Miyoko was always a rather quiet child. This led to some people assuming she was shy, which of course, led to bullying. It was never very obvious bullying; Miyoko barely even noticed it, but one day, some of the bullies decided to set Miyoko up. They pulled her along to watch "something funny", and started to play a stream of the most recent AKB0048 Senbatsu Sousenkyo live. Miyoko realized that it was AKB, but something about it spoke to her. She didn't realize that the other girls left her there as she was watching, and went to fetch one of the teachers.

Heading to the 00 Auditions

Despite the punishment she received for watching music, Miyoko grew to like AKB, and, in secret, started wanting to find out more. Eventually, she found that 00 opened auditions for AKB0048's 153rd generation understudies, and she wavered a lot if she was going to apply or not. She wanted to, but she didn't think she would be able to get to the second round - if she even was able to get off Aleenstar. An opportunity did arise, though, when her father proposed that she should follow him on a business trip to another planet; it would be a good experience to have. She agreed to come, and took the flight to Baltistar with him. However, the flight back home got cancelled, so they had to travel to an Entertainment neutral station nearby. No flights were scheduled to go back to Aleenstar for about a week, forcing Miyoko and her father to stay at the station. Her father spent this time working, while Miyoko spent this time debating with herself. She eventually decided to record an audition tape and send it to AKB. She knew she wouldn't be able to get away later, so she would have to leave during that week - before she even got the message regarding if she had passed or not.

She eventually decided to take the leap, however, and used money she had saved to buy herself a ticket to Akibastar, and then a room at a hotel for a month. It was during her time at the hotel that she received the message that she had passed the first round.

Miyoko doesn't have any special nicknames, other than the ones Honoka uses from time to time, primarily being referred to as Miyoko (みよこ) or Miyo (みよ).

"”Trying to life to the fullest, I am AKB0048’s lucky dragon, Ryuuzaki Miyoko here~!”" - Miyoko's catchphrase 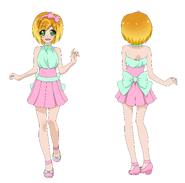 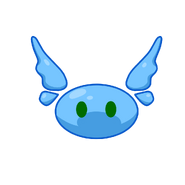 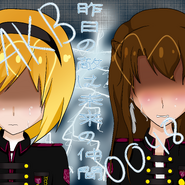 Kinou no Teki wa Mirai no Nakama Limited Type A