"Good evening, I am Team A's Ikuta Erika the 11th. Please listen to my song."

She was also known as Ikuchan (いくちゃん) and Iku (いく). A young woman with a great passion for music and art, Ikuchan is known for her exeptional piano skills. She has won a few prizes through them and intends to become a professional piano player in the future. At the moment, she is studying music at the Mozart Institute.

Melody's eyes are purple with a slight gradient to lavender, depending on the light. Her hair is purple as well and falls over her shoulders. By nature, it's slightly wavy, and she doesn't have a fringe; she commonly braids the hair that otherwise would cover her face. She wears a bit of her hair in a bun while leaving the other parts down. In the past, she used to have much longer hair but she cut it for the sake of being able to practise better. She used to wear her hair in a simple, central parting instead of the braided front hair, but changed her mind in SC0125. Similar to other memebrs of AKB0048, she has heart-shaped linings in her eyes and on her hair.

She prefers feminine and elegant clothes without too flashy pattern or accessoires. She prefers to maintain a rather adult image to be respected by older people which, despite her young age, works rather well. While her favourite colour is light pink, she rarely wears the colour but rather white and creme colours. She owns a bit of jewelry which she inherited from her grandparents and sometimes can be seen wearing it. She is uncomfortable with wearing exposing clothes or swim wear and therefore doesn't do gravure shots.

Melody is a polite and friendly girl with good manners. She's holding herself back and waits for others. However, she often is also arrogant if she's private. Melody has grown up, knowing to be talented and great and due to this, she acts like this. As well, she's selfish as she wishes to be the best. She does anything for this. She has the tendency to be friendly towards people, she believes to be "useful" for herself. Thus, she ignores people who aren't useful.

Melody doesn't believe in magical things. Thus, she doesn't believe that being similar to an original member helps to succed but being in the management's favor. She believes in the coldness of the show buisness which resulted in the fact that she believes that popular relationship-pairrings (e.g. MiyaMiya) are planned and made up, exactly like most of the images and personalities of the members. Only on-stage personalities (e.g. Kashita Miyagi being a innocent girl who cannot harm anyone or Kimura Mei's princess character) are the images, Melody has started to believe to be real.

Eriko loves music and playing the piano a lot. She's often seen playing piano and knows many songs by heart. She can lose herself completly in playing and forgets the world around her. Sometimes, she spends the whole day with this and forgets stuff, she had to do. She enjoys to read and make up conspiracy theories even though she doesn't believe them very often.

Melody doesn't really have a Oshimen but whenever asked, she stated it's Acchan the 19th. Other members, she admires are Katomina the 8th, Sakura the 10th, Takamina the 7th, Miori the 9th and Rena the 9th.

Due to having stricter education, Melody has less solo work than other AKB0048 members. She sometimes is a guest to radio and TV shows but mainly focuses on stage performances and musicals.

Her main asset is playing the piano; something in which she excels. She knows many songs by heart and even composes her own pieces from time to time. She is also rather good in school due to her upbringing, but recently felt back.

Comparing singing and dancing, she prefers and is better in singing. She had a little bit training before 0048 as well. She practises dancing but not as often as singing. Being a soprano, she is much better in singing high notes and her vocal range doesn't even allow her to hit lower keys.

Melody grew up on Kazakhstar, living a peaceful life and grew up in the 'upper' society of her homeplanet's capital. As the daughter of a professional pianist and a film director, she always had a connection to the world of entertainment and music, and the world of rich people. Melody had been studing music in general since being a little children. She learned piano since she was very young and loves it. She also learned a few other instruments but didn't continue playing those.

Melody had the wish to "do something bigger" with her music since she was eight years old. However, she didn't know what exactly until she actually became interessted in 0048 due to some classmates. She eventually decided to audition but didn't know how her parents, espacilly her mother, would react. After all, she decided to audition and wait for the result before telling her parents. She planned not to tell them if she wouldn't pass. Even though her mother wasn't happy about it, she left for 0048. The reason why she didn't told her parents before the 1st round results was that she didn't want to admit that she might had failed in the first round.

She went on a hiatus for about three months in SC0125 to solve several family problems; her mother wanted Melody to return home as she considered being an idol as unfittable for her daughter. After three months, in which the problem didn't solve itself, Melody decided to simply return to 00, even if it meant cutting ties to her family. She knew that her brother would support her, and when 0048 hold a concert on her home planet, she joined them to return. She succeeded shortly after this. The name of her succession concert was Kimi wa Melody (君はメロディー, You are Melody), a reference to her catchphrase. She became Ikuta Erika the 11th. After this arc, she started attending another school on Akibastar which focuses on music work and is stricter than Infinity Academy as a deal with her mother.

Early in SC0126, she told the other members that she intended to graduate to focus on playing the piano and studying music. She would, however, continued with Magi and 0048 activities.

Melody's mother works as pianist and teaches various instruments. She's strict which is why Melody is able to play (basics) on diffrent instruments. Even though she accepts AKB for fighting for music, she dislikes idols in general. After Melody joined 0048, their relationship strained futur, leading to Melody's hiatus to solve her family problems.

Melody's father is film director and travels very much. He has workes with AKB and, in diffrent to his wife, does see them as great representantives of the music. He is very supportive to Melody even though he's worried about her.

Melody's older, 23-years old brother who is a famous actor, a bit to his father's impact. Melody and Louis get along very well despite the rather huge age grap between them. Sometimes, she thinks that Louis can be quite weird. She either cally him by his given name or Niisan.

Melody's older brother who is 16. Melody doesn't get along with him very well due to his behavior. Justin tends to use his family's success to celebrate parties ect. while not doing anything on his own. As well, he flirts with everything female, according to Melody.

Melody is written in Katakana as メロディー. 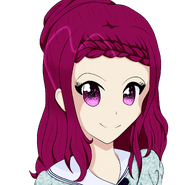