View source
Even if you fail, don't give in!! You're bound to succeed someday♡

Hotaru may seem like a loud and bubbly girl on the outside, but within, she is whether shy and withdrawn, however, she aspires to change herself. Vowing to become a more open individual, she tries singing, finding that she has a talent for it, however, she has severe stage fright thus losing confidence in being more out there. She is very kind as well as helpful, always putting others before herself. She writes her own song lyrics but is too embarrassed to show them to others, thinking her lyrics aren't good enough. Hotaru gets embarrassed and confused rather easily, sometimes becoming frustrated because of how confused she is. She isn't much of a sweet tooth but on rare occasions, you can find her sucking a lollipop in secret.

Hotaru (ほたる, Hotaru?) is very commonly known as the word which means "firefly" [3]. 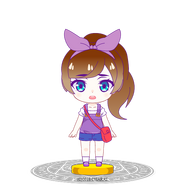