"Belonging to Team A, formerly in the 153rd generation of trainees, I am Eguchi Aimi the 4th. It is a pleasure to meet you."

Alisa Murasaki ( ) is one of AKB0048's current successors, holding the name Eguchi Aimi the 4th (4 ). She is known for her tendency to being overly polite, no matter who she's talking to. Before succession, her most common nickname was Alirin ().

Aimi has a long, thick, blonde hair with slightly darker ends, and fair skin. She is of average height, neither standing taller than nor dwarfing most other members. While both of her eyes classify as peach coloured, Aimi a slight colour tint differs the shades from eachother - a subtle form of complete heterochromia. She has heart-shaped lining in her hair and eyes, as well as a clover lining in her eyes, the meaning of which is unknown.

Before she succeeded, she usually had her hair tied up in two parted pigtails, but since succeeding, she has, other than grown her hair out slightly, started to change up her hairstyle to better work with whatever she's currently wearing, or simply because she wanted something different.

While not being one to be picky about what she dresses in for photo shoots and work, Aimi's own wardrobe consists largely of modest clothing. She likes dresses and cardigans, and is commonly seen in a combination of the two whenever she's picked her clothes herself. She is also a big fan of various types of hats, and whenever she has the chance to wear one, she usually takes it.

Aimi is known to be overly polite to everyone she speaks to, no matter who it is, she never uses casual speaking patterns, persisting to using the suffixes -san even with people she is close with, or are younger than her, something that tends to annoy some people. She hardly ever makes jokes either, not being quite sure how to approach the subject, and any she ever makes are self deprecating.

She a very non-confrontational person, seing herself more as a pacifist, and dislikes contradicting others unless she absolutely has to - even if that person may be wrong - and instead chooses to keep her opinions and thoughts to herself. If she decides to voice her opinion, it's usually phrased as a question.

She does at times not even speak up when it would be preferential, if it would disturb an already ongoing conversation. At times like that, she normally silently does what her idea was, not confirming it with the others.

As a child, Aimi was always of the reseved kind. She hardly ever spoke, whether it being with others her age or adults, even if it was with her parents, Murasaki Haruto and Aiko. For most part of her childhood, her parents thought it was due to being shy and self-doubting, and constantly tried to get her to talk, and get out of her shell. However, as she grew older, they realized that it wasn’t because she was insecure that she wasn’t talking much, but rather that she didn’t feel like talking unless it was absolutely necessary.
This, of course, left her without a lot of friends in her childhood, something she has stated didn't bother her all that much. This also meant that she was never subjected to casual interaction, and it is still reflecting on the way she speaks and interacts with other people; She never uses casual speaking patterns, no matter who she is talking to.

Despite being a citizen of Akibastar from birth, Aimi was not really interested in AKB0048 growing up, figuring there were more important things than an idol group. Eventually, though, she had a run-in with a few of the members, and realized they were normal girls who was doing a job, a job that let them do a variety of things rather than being stuck doing one, sole thing. This was what appealed to her and really made her consider auditioning, and when she brought the prospect of joining AKB and becoming a member to her parents, they were concerned at first, as Aimi still had not started talking a lot, more than when she was younger, but still far less than most girls her age. She convinced them to let her join eventually, though.

Aimi had one major nickname prior to succession, Alirin (), a nickname derived from her real name. 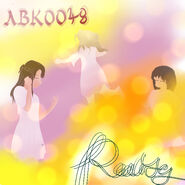 
Placement - Round 2 - Lost to Kasumi Yuuna