Honoka Miyabi ( ほのか) is a member of Team B. She is a successor, and has received the name Matsui Jurina the 8th (8). She is known to be of the most energetic members in 00, and is also known for her plethora of nicknames she give to others. She is also an infamous prankster on other members, and her close relationship with Kashita Miyagi has garnered a lot of attention.

Jurina has pink eyes, and her childlike appearance matches her usual, cheerful behaviour. She is rather tall considering her age. Like all of 00’s members, she has heart shaped lining in her eyes and hair. There is also a star lining in her eyes, the meaning of which is unknown. She does also commonly wear a pair of ribbons that tie her hair up, no matter if they're her own or Kashita Miyagi's.

Anyone who would be asked to describe Jurina's clothing style would say "Chaotic, Fun, and Colours". Jurina uses her clothes to express who she is as a person, and it shows. She loves bright colours, and has on more than one occasion been advised by other members to change into something less of an eyesore. She isn't opposed to pom-poms or an abundance of ribbons, something she constantly wears in her hair.

Prior to her succession, her usual hairstyle was a pair of pigtails reaching to around her lower shoulderblades she tied up with ribbons, but when she succeeded, she cut her hair shorter, and it reaches a little past her jaw. Part of it is also tied up into two buns, which are secured with ribbons. She also likes to vary this hairstyles with other forms of space buns and the like.

Jurina is known to be very spunky and energetic, much like a child. She has become notorious for being one of the biggest pranksters in 00. Usually, she targets Hirate Yurina, but every member is aware that no-one is safe. She can tend to be impatient at times too. Generally, Jurina shows very little respect towards her senior members and most staff, as she treats everyone like she would a friend.

A side affect of her being as happy and energetic is that she is really bad with dealing with people who are sad, something she really dislikes as well. Usually, she'll try to crack a joke or otherwise get them to smile if not laugh, but if that fails, she'd not know what to do. She does also have difficulties dealing with negative emotions of her own, sometimes to the point where she basically shuts down.

Jurina's personality has been directly influenced by her relationship with Kashita Miyagi. Jurina cares deeply for Miyagi, and constantly tries to make sure that Miyagi is smiling. At the start of her idol career, she acted much more maturely than she has grown to do, because of several reasons; people seemed to enjoy it, she got more comfortable with the spotlight, but above all, she grew more secure as her friendship with Miyagi got stronger. Upon Miyagi's death, Jurina was visibly affected, and isolated herself from everyone, but seemed to bounce back alarmingly quickly.

She is able to completely shed the child persona, and act maturely, if a situation really calls for it - usually if someone insults idols or if she feels as though she can't convey what she wants to otherwise. She does, however prefer not to.

Jurina is very skilled in variety.  She loves to make the people around her laugh, and as such, she is more than capable in both straight jokes and physical variety. She does also have perfect pitch, which makes it easier for her to learn new songs, and she is a relatively good singer. Despite this, she is arguably better at dance, since she finds this more fun, and she has the energy for it.

She is able to ramble on demand, which she has used on more than one occasion to stall someone for a prank.

Her combat skills are practically nonexistent; she has horrible aim with a rifle, doesn't hit hard enough to be good at hand to hand combat, no-one with a sane mind would place Jurina anywhere near something as dangerous as a micsaber unless it was in stun mode. She isn't horrible at LAS maneuvering, but even there she could use some work. Something she is good at, though, is dodging. After all the times Miyagi has made her the target during paintball practice, her instincts when it comes to incoming projectiles have improved greatly.

Jurina has lived on Akibastar her entire life. She has been a diehard fan of AKB0048 from birth, as she was surrounded by it constantly, with both her parents being fans themselves. Growing up in such a likeminded house, it was a given pretty much from the start that Jurina would eventually audition for AKB0048. She auditioned, despite actually being too young, but due to the fact that she was going to turn 12 that year, she was accepted with her parents' support.

When joining, Jurina was a lot more composed around other members and fans, but as time progressed, she has gradually grown more childish and energetic. Whether this is due to people liking it, Honoka feeling more secure in public to show her more childish side, or any other reason, is unknown, but she does enjoy her life as an idol. She is one of the youngest members ever to win the Senbatsu Sousenkyo.

Miyabi in Kanji is written .
The meaning of (“Miyabi”) is unknown.

Two of Jurina's nicknames prior to succession, Rainbow-chan (ちゃん) and RainbowMiya are based on her association with rainbows, and the latter also being a nod to her relationship with Miyagi. The third of her nicknames, Miss Perfect Pitch, is a nod to the fact that she does, in fact, have perfect pitch.
She is also commonly referred to as Honoka-chan (ほのかちゃん).

Hint: Hover over the quotes! 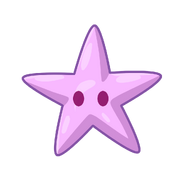 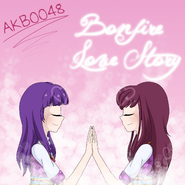 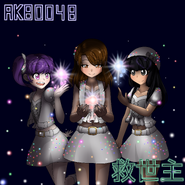 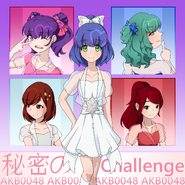 Himitsu no Challenge Type A cover

Ie alongside Miyagi and Rena