She is commonly known as Harrupi (はるっぴ). Another nickname that she has is Harupyo (はるぴょ) ,but it's not used often.) She's most recognize as the daughter of the current holder of IBOT industry .

Nami is a young beautiful woman who is 160.02cm tall. Her natural hair color is Byzantine blue with a heart on her hair. Her hair is naturally wavy; its brought down to her mid-back. Before, she always had her hair in a side-pig tail,but after her succession, she just lets it loose. Her natural eye color is Aquamarine inherited by her mother.

Her skin color is fair skin; luckily she gets tanned rather than getting easily burned when she is in the sun.

Nami's body structure is Inverted triangle shaped. Her weight is usually at 145 pounds

Before joining AKB0048, Nami was an incredibly shy girl because this she wasn't able to make friends when she was young instead be by herself.

She wasn't taught to defend herself when she was young. This made her into a coward and helpless making her bullies target her even more than they usually do.

Since she was small, Nami would always be serious about everything with technology because that's how she grew up surrounding herself with technology. If you ever have the chance to talk to her, she'll most likely be reading or studying more on robots.

She is a hard worker who strives to succeed at something she wants to obtain. Having straight A's in all her classes likes to be a high achiever.

When Nami was the Flying Get for her second round in AKB0048's 152nd Generation audition. She finally realizes that if she wanted to make it through she would need to make some allies or for anyone else, friends. As she talked more with certain girls at the audition, she came to realize that it's good to make friends so wouldn't be alone and to make herself safe. She will have to get used to it as she is not a social girl.

Nami is clumsy at times and bit awkward.

She is a spoiled child, who can quickly get what she wants with the money if the thing she wants is an object.

Nami cares about others around her. She cares about how they feel, what they need, or if everything is okay.

She focuses on Business. She has another side of her that she does not show with her friends. She can be quite clever. She's quick on her feet and cunning. She can easily persuade someone when she talks about what she wants from them. She is very charismatic and fiery heiress as intelligent and business savvy as her millionaire family.

Life before the Auditions

Nami Matsuto was born on Akibastar this is where she got her love for AKB00048 idol group. She was born into the rich life loving it every moment, not feeling the poor life. She went to a private school in Akibastar called STAR Prep Academy. She was an introvert meaning she's a shy girl unable to know new people. At the age of seven she moved to Maiamistar as her father was about to become the new owner of IBOT Industry given by her grandmother before she had passed away. Life went down hill for Matsuto Nami.Still having no friends and being bullied for the rest of her life in the worst possible ways. Her bullies called her " No Friend Nami," because of not having any friends. This bothered her; feeling very humiliated going by with this nickname for many years. They even made fun of her for being friends with robots telling and laughing at her saying that she can never make any human friends. It made her more isolated not able to tell her father or mother knowing they will never understand her pain that she deals. Adding that her parents are very busy people whom could not spend time with her daughter. Her siblings were busy with their personal life. The only thing she did to feel great is either volleyball or creating robots to pass the time.

When her birthday came around finally turning thirteen. She declared that she will be auditioning for AKB0048's 152nd Generation. It was time for her to decide her own path and what she wanted to do this was her long dream ever since she was four years old. Now she wants it to become a reality, also she didn't want to be in Maiamistar with the people she tortured her for so many years. The song that she chose for her audition is Yume no Kawa (River of Dreams) with the help of her dear friends.She managed to make a good audition video. A month before the second audition, she received an email informing Nami that she has been accepted to the second round of the auditions. With the information she had; Nami went to inform her parents about the amazing news, but her news made her mother very worried and angry knowing her daughter will be wanted by the DES soldiers for supporting Entertainment. This lead into an argument. A day before going to the auditions, Nami lashed out at her parents including her brother that she will go no matter what. With that response her mother sealed in daughter in her room so she would miss the audition. Suddenly the doors were unlocked who did it? No one knew, but with that she took her chance and fled with some clothing.

Nami had arrived to the Flying Get. She was all alone when everyone else began to socialize with one another. The only thing she did is listening to Ginham Check. Finally she decide that it was time to make some allies that could help her pass the second round; she walked toward Shiraki Chiyo and Itano Tomoko introducing herself. She felt very pleased. Later she met Tsubasa Diana. It felt nice talking to people. As training began, she was sent to do Hand to Hand combat training supervised by Akimoto Sayaka the 15th, Taiyamoto Akano, and Hoshikawa Rei. She partnered up with Chiyo to fight against, once she fell to the ground. Later, Tomoko joined the group making it three people. They continued their training going to different areas for training. As the second round came around, she was very frighten and nervous thinking if it was a mistake to even audition or was it foolish to go against her mother's orders? She shakes her head having her confidence back up again. Nami knew she wanted this since she was four, she is not backing out now. With friends Nami had made all of them teamed up to rescue the lost members. With the surprise, it was all a test for the girls. She had passed the audition becoming an official AKB0048 member. Quickly enough, Kashita Akane passed out.

She could easily create robots,androids,anything that would involve with robotic engineering.Though,it may take many tries for her to fully succeed,she won't stop until it succeeds.Drones are easy for Nami to create.

Surprisingly. Her singing is great compared to how many years she's been in 00

In the beginning. Nami kept tripping or rather falling onto the ground.She was a beginner in dancing when she joined 00. Now she's a little bit better in dancing.Still struggling,but getting there.

She loves to stay in character.Easy for her to memories her lines when she's alone and no one to bother her.

Nami has a very good memory and is able to remember every detailed that has occurred. She can never forget, it's a curse for her.

As required for photo shoots. Nami has learned this technique from Mocchi the 13th and is able to change poses in every second to spend less time on it This is called Rapid Speed Posing. She's able to think of new poses in second after another. 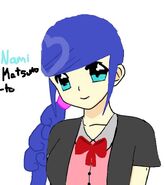 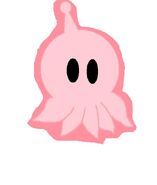