She also had a solo career during her time. It's unknown what happened in SC0116 when she suddenly disappeared from AKB0048 for no known reason. Her current whereabouts are unknown, and while there are a number of rumours and theories surrounding her disappearance, nothing is known for sure. The character was created collectively by several users.

When wearing her successor uniform, she also wore a black and red hairpiece decorated with a sphere and a lemon in gold.

Akiko was considered to be a 'happy-lucky-go'-girl who wanted to smile all the time. As she became Center Nova, however, several members were distant, as they usually were. She was also trying to preserve their friendship. 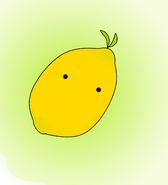