Itano Tomoko is one of the Understudies of the 152nd Generation.

Tomoko used to have long brown hair similar to the rest of her family however at the end of December SC0126 she cut it and currently has shoulder length hair. She has brown eyes with heart shaped shine in them.

Tomoko isn't very social person and prefers being alone, however she cares very much for people close to her even though she doesn't really show it. Like other Itano girls Tomoko was trained her whole life to become next Itano Tomomi, however unlike them she finds it very hard to do so as she feels like a fake when she does that.

She strongly dislikes succession system as she believes it forces people to become someone else instead of showing what they can do as themselves. She also has a huge dislike for traditions in general mostly because she felt forced into the role of Tomochin as she was growing up. Instead of starting to accept things as she is the part of the group those frustration seem to be getting much worse. She usually hides them but if she gets really annoyed she explodes them all out.

Because of her frustrations about AKB0048 traditions growing she has recently got a very negative outlook on life and is very rarely seen actually happy and having fun. She usually gives off the impression of boredom, anger and annoyance.

Tomoko doesn't like talking about her feelings unless it's with few certain people she trusts the most.

Tomoko was born on Akibastar to Itano family. Trained from young age to become Itano Tomomi, Tomoko knew about 00 since she could remember. She always had to take lessons and learn to become Tomochin and even though she admired her very much she was first Itano to find it really hard. She tried to do it because she didn't want to dissapoint her parents but by the age of 11 she felt very fake. She was mostly acting like she was supposed to but it was always very hard for her and deep inside she always knew she didn't want to do it. At that time she met boy Kanzaki Kazuki, who told her that she should be herself. Tomoko started to think about it and when listening to 00 videos she became very big fan of Watanabe Mayu and before she realised she started to wish that she could become her. When she applied for 152nd generation auditions she decided that she'll be herself and not Tomochin and is very happy that her cousin is in earlier generation and will probably succed her beofre she became succesor.

On the auditions Tomoko met Chiyo, Nami, Diana and Hibiki and they were talking a bit before training started. She was in the group for hand to hand combat which was taught by Sayaka, Rei and Akano. She was at first paired with Mimino, girl who decided to quit audition in the middle of training and then Rei told her to go train with Chiyo and Nami. At lunch she sat alone and was mistaken by Hotaru for Rin. When she ate she left dinning room and sat alone in the corridor where Rei came and talked to her. She was very shocked when 5 members were kidnapped especially since one of them was Rin. She was one of those who demanded that they could help with rescue. She was shocked to learn that everything was just part of the audition.

Despite promising herself that she will be herself not Itano Tomomi, Tomoko never actually revealed to anyone that she doesn't want to become Itano Tomomi, mainly because she was afraid of what her mother would think. The only people who knew were Rin, who guessed it herself and Rei who also saw hints of it and eventually became the only person besides Kazuki that Tomoko talked to about that. She also soon didn't want to become Mayuyu anymore as she realised that becoming her would also mean not being herself. As she was never really successful Tomoko began to associate that with her being a fake person and as the new year SC0126 started she promised herself that she will reveal that before the year is over. At the beginning of December she still hasn't done it.

She participated in the Unit Taikai as part of SisterWings despite orginally planning to do so as a soloist.

Hoshikawa Rei - Sempai. Tomoko met her at auditions because she was one of members whoe were teaching hand to hand combat training. She told her to go train with Chiyo and Nami when Mimino decided to quit audition. The two of them eventually got close and Rei is one of rare people (besides her best friend Kazuki) to whom Tomoko speaks completely honestly.

Itano Tomorin - Sempai and cousin. Two of them get along well but sometimes clash due to their different opinions about traditions.

Makori Ririka - Fellow Kenkyuusei. They spend a lot of time together as they are roommates. They participated in the Unit Taikai as part of the same unit.

Honda Hibiki - Fellow Kenkyuusei. Tomoko seems to have some respect for her. They participated in the Unit Taikai as part of the same unit.

Tsubasa Diana - Fellow Kenkyuusei. They spend a lot of time together as they are roommates. They participated in the Unit Taikai as part of the same unit.

Sashihara Rino the 11th - Fellow kenkyusei before her succession.

Shimazaki Haruka the 11th - Fellow kenkyusei before her succession.

Kodama Haruka the 8th - Fellow kenkyusei before her succession.

Itano Tomorin- Her cousin with whom she is quite close but sometimes clashes with her because of their somewhat conflicting opinions on tradition. She is now also her sempai as part of 150th generation understudies.

Itano Tomoi - Her aunt. She was Itano Tomomi the 14th.

Itano Tomona - Her mother. She was Itano Tomomi the 15th.

Kanzaki Kazuki - Her friend who convinced her that she should be herself.

Mimino - One of girls who didn't pass audition. She was suppossed to be Tomoko's partner at hand to hand combat training but she decided to quit audition in the middle of training. 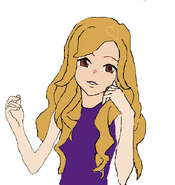 Tomoko hasn't participled in any A-Sides yet

"It's not my way of doing things to have long emotional conversations in which I suddenly start talking about my true feelings." - Tomoko to Hibiki at the Unit Taikai.

"They won't be able to kill each other. If they just hurt each other a bit it won't hurt anyone. Except themselves of course." - Tomoko when it looked like Ririka and Kaoru were going to fight each other.