She is a calm and quiet person who prefers to watch than to act. She enjoys supporting people and has no particular goal herself in 0048, but rather wants to see the group grow as a whole. She is quite close to Paruru, her best friend in 0048, and Tomomo, her childhood best friend, but sometimes finds herself unsure whenever she is the person who woke up with amnesia or the person Tomomo once knew.

She graduated in SC0127 to focus on personal development and individual projects, but stayed on Akibastar. She's currently in the process of opening a café.

Yuihan's hair is long and wine red. She is never seen without a ponytail; a hairstyle that she is too used to give up - she even sleeps with it. Sometimes, her hair is slightly wavy which comes through nature. Her eyes are wine red as well, and like all other members of AKB0048, Yuihan has heart-shaped light reflections in her eyes and on her hair; she doesn't remember when she gained them, and it's presumed that she gained them before meeting Tomomo. Her skin is pale, and she requires glasses to read.

Her fashion style is up-to-date and heavily influenced by Paruru. Despite having no upper limit to her clothes budget thanks to her connection to the Kashita family, she doesn't mind reusing clothes at all. While her favourite colours are dark red and magenta, she doesn't wear them a lot. Her generally sophisticated and feminine style is often accompanied with a pearl bracelet or necklace. She has quite a few green clothes in her collection, and likes traditional Japanese clothes a lot; she doesn't wear them in daily life though.

Yui is a calm and collected woman who prefers watching over acting. She isn't introverted, but not an out-going character either; she prefers to have sophisticated conversations over small talk or jokes. She is interessted in learning anything and enjoys discussions. While she generally prefers to keep her opinion to herself in order to avoid a fight and remains polite, she isn't afraid of speaking up if neccessary, and she also is willing to help. She is often preventing damage done by Hime!Paruru or Tomomo's personalities. She worries for others; especially if her friends aren't nice to others, but tries to consider both sides. She remains dedicated to her close friends though; often trying to find a spark of truth in their words even though they hurt people.

She enjoys strategy games such as chess and reading. Her fields of interest vary a lot and change over time; she has a large collection of non-fiction books, and is interessted in reading biographies and science fiction. She rarely speaks about herself; she prefers others to start talking but also prefers to avoid revealing the fact that she doesn't know who she is on her own. She sometimes can be found daydreaming and thinking about the things, she knows about herself.

Despite being average in singing, Yui quickly remembers lyrics, melodies, choreographies and lines. She doesn't have a special method to do so, she simply quickly remembers those. She is an average actress but has no problems with remembering lines at all. Thanks to the time, she has spend with Paruru, Yui has developed a quite good sense of fashion, and her acting has improved a bit. As a result of Orchestra, Yui knows how to play trumpet. She quickly learned it but due to the lack of time to practise, is far from proficcient or anything.

She likes to play chess and shougi a lot and is quite good in both chess and shougi. She is also a fast reader and quickly understands new things, but has a rather small knowledge about the world in general, likely due to her amnesia.

She is fluent in English, French and Japanese. For a long time, she didn't know why but nowadays assumes that it's because she is from Winostar. She is better in Japanese than in English and her English is better than her French. She is able to understand all languages and speak accentless though. She does to grammar mistakes in French though.

While not remembering, Tomomo was able to confirm a few details about Yuihan's past which she doesn't remember. Yahiru met Kaoru at school when she was twelve years old. She introduced Tomomo to AKB0048 and the two quickly grew close. She rarely talked about her home or family, hence Tomomo didn't know a lot about them. When AKB0048 opened auditions, she considered auditioning, but she decided to wait for Tomomo who was below the minimum age.

During this time, the Winostar government started to ban entertainment stronger, and when Tomomo and Yahiru secretly attended a guerilla live, Yahiru was dangerously hurt. Tomomo believed her to be dead and was forced to escape the DES troups, leaving Yahiru behind. It's unknown what happened between this event and SC0123.

Yui was found by Kashita Shouta on May 23rd of SC0123 on Tekistar without any memories of who she was or how she got there. He brough her home where she could recover. Without memories, she had no idea where to go, but was fortunately adopted by Shouta's grandmother, Kashita Shirako. She adopted the usage of the name Kashita Akane for the moment.

Without much of a plan what to do, she focused on trying to find ways to learn who she was. The only thing that felt, or rather sounded, familar was AKB0048's music to which she had free access on Tekistar. Despite the obvious dislike, her adopted relative Kashita Miyagi had towards her, she decided to head to Akibastar with the hope that she might figure out something more about her own identity. When the auditions opened, she took the chance and auditioned; if she was to become an idol, her family might recognise her.

She participated in the 152nd Generation auditions, and met the members of her future generation, as well as the other members of AKB0048. She grew close to Kimura Mei, but also had to deal with Miyagi's obvious dislike for her.

Only a couple months after she joined AKB0048, she was announced to become a successor. She was glad to succeed; the name Yokoyama Yui the 13.5th was for sure her own now. She was reunited with her new friends and continued her life in AKB0048.

She was part of KISEKI and Majisuka Gakuen 00 where her character, Tactic, played a rather large roll alongside Chiyo's, Nami's, Mei's, Akarin's, Miyagi's and Hoshina's characters. During the Halloween Shuffle Concert, she was transferred to Team K; much to her dismay without Mei. The two remained close either way. She also was part of the senbatsu of Kyuuseishu. One of the B-sides, Hokkyoku Hikari was her first center performance.

In January, she participated in the anual Janken Taikai, placing 7th. She lost to Miyagi, but was part of Himitsu no Challenge. She was part of Reality as well, and in her first election, she placed 11th; therefore, she was part of Infinity no Moyou. In the end of the year, her best friend Paruru became a successor; much to her joy.

In early SC0125, she placed 4th in the Janken Taikai; she lost to Rairin who'd win the tournament. She thus participated in the A-Side of Castle of Glass, and was also selected for Rose no Hibi. In the election of SC0125, her poster was a collaboration with Paruru. She placed #9; ranking up two spots. Thus, she was part of Asphodel no Sekai.

In early SC0126, she promoted the A-side of Masshiro na Mirai wo Irodzukeru as senbatsu member. In the Janken Taikai of this year, she lost to Asami Mirai and thus wasn't part of the next A-side. Fortunately, she was selected for Sekiranun no Geijutsu. [mayuyu] Originally, Yuihan intended to participate in the election and placed tenth in the prelims, but due to having an illness soon after the prelims, she decided to drop out since it wasn't sure whenever she could participate in the final single at all. She was selected to perform Boku wa Natsukashii Piano though, and participated in the Unit Taikai with Tomomo and Paruru, in Muses Écarlates. During their performance, a MC, she got lost between Paruru and Tomomo's fight, once again regretting befriending with them. Her unit lost to Team Nerds.

Kashita is written as . can be translated as river bank and as field.

Akagi is written as . can be translated as red and as castle or fortress. Curiously, her name has the same second kanji as Mayuyu's birthname has.

The meaning of Yahiru, written やひる, is unknown due to the name being written in hiragana.

Her surname is taken from the Kashita family; Kashita Shirako decided to adopt her which created one of her nicknames which Honoka gave her - Miyaunt (ミヨーント) because this theoretically makes her Mayuyu's aunt. She is also called AkaYui sometimes which is a mix between Akane and Yui, as well as Akagi and Yui. She inherited the nickname Yuihan from the original Yokoyama Yui. Her com name is Aunt.

To see all images of Yuihan, plese refer to her category. This is only a selection. 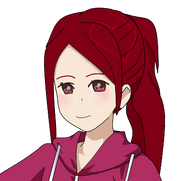